Fawad Khan Dressing Styles. Fawad Afzal Khan is the former singer of a band named ‘Entity Paradigm,’ and his commencement on the road to a successful acting career ever since the dissolving of the band. Apparently, the limelight actor has got so much more to give to the world than just his fantastic voice and matchless looks.

If I have to select one person who has got an equal amount of love and fan following across both sides of Line of Control (LOC), it would not be wrong to say that it is none other than ‘Fawad Khan.’ He is a much-adored Pakistani stunner who reached TV screens via Pakistani serials in which he gave his stunning performance, and that went super-duper. He is not only famous in Pakistan but also Bollywood.

To the times when he set his fans’ hearts on fire with his performance in everyone’s favorite romantic play ‘Humsafar’, to the times he finally entered into the Bollywood industry for bigger opportunities, he has gained even more fans in India alongside Pakistan. Throughout his singing and acting career, one aspect of his personality never changed, and that is his ‘fashion endeavors’. His stylish dressing styles always stun his fans so much so that many of his male fans keep their eyes wide open to stay updated with what he wears so that they can copy the styles of their much-loved actor. In today’s post, I will take you on a road to the glamour-stricken wardrobe of Fawad Khan.

Being handsome surely helps, but not all good-looking men know how to look stylish in any outfit that they wear. Well, the truth is the opposite in the case of Fawad Khan as he looks great in any outfit.

This photo is from lux style awards 2015. This outfit is the most luxurious looking that makes him quite at the top of men’s fashion in both India and Pakistan. As critics claim that he dresses the best among so many of his competing stars in the industry.

As stylish as his dressing was in ‘Kapoor and Sons’ itself, he has always been spotted by the media looking chic during its promotions. No doubt his net worth is skyrocketing to about $2 million. His beard definitely gives him so much swag, check out Beard Styles For Oval Faces.

This picture was taken during promotion of his movie ‘Kapoor and Sons’. His casual look in dark shades and finely cut beard all combine to make an overwhelming effect on his fans across both sides of borders.

This image surely features a quite distinct and eccentric look of Fawad Khan, even his hair and attire seems out of the blue – in which he dressed up for Koovs Man and G-star Raw style. Fawad Khan has managed to be one of the best-dressed men for his picture-perfect combo of personality and style. Do check out our collection of the best Fawad Khan Hairstyles.

His ‘Brooks Brothers’ outfit depicts endless class and style that coincides artistically with his unique personality. Fawad Khan’s clothing styles are usually capable of doing that frequently. His chic dressing style no doubt leaves a deep imprint on our mind that is surely hard to forget.

Fawad Khan is a classic man, and he knows what fits him well and what does not. His ‘Vogue Beauty Style Awards’ look, says a lot about how far has he progressed not only in his acting career but also his fashion priorities are just top-notch and are definitely leveling up to the career he is building for himself.

Probably Fawad Khan is one of the rarest humans to wear sneakers with a suit, in just the most right, acceptable and classic way. Well, it is no secret that Fawad Khan is capable of nailing the most eccentric and underrated clothing styles, and he very well knows how to make them stylish again. 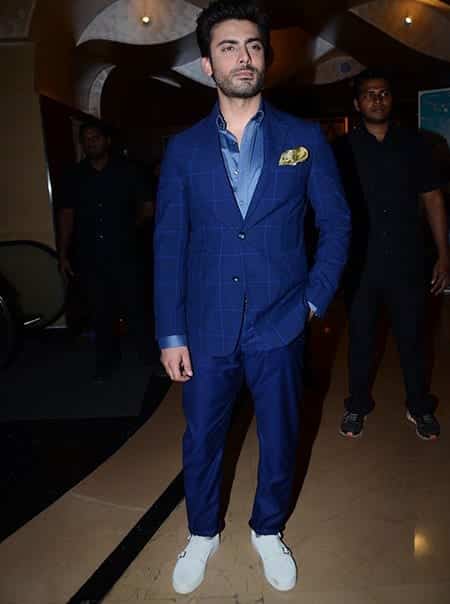 If you are looking for a man who dresses up smart and perfectly in a suit, that is Fawad Khan. He has a unique ability to look exquisite. It is, therefore, no wonder that he is named the sexiest man.

When it comes to unique fashion sense, Fawad khan is one of his kinds. He is the one personality who can wear sneakers with a suit in an immensely symbolic and unique way that just makes it so oddly admirable. He looks so happy in this blue outfit.

When it comes to stylish dressing, Fawad Khan seems to have mastered the dressing sense. His Indian Couture week outfit has added quite a lot of vigor to his demeanor and posture and surely adds a bit more bulk to his attire.

↓ 19 – A Handsome Look during Promotion of ‘Khoobsurat’

On the promotion days of his first released film ‘Khoobsurat’ alongside Sonam Kapoor, Fawad Khan did not fail to win hearts of his fans with his chic dressing style even before the film get fully released. Do check out Best Dressing Styles of Hrithik Roshan.

The 38-year-old celebrity happens to have attached a stigma to himself for wearing suits in a hundred different styles, and each is equally very classic.

His ‘Kapoor and Sons’ style and outfits are nearly as good as his personal fashion preferences. Fawad Khan looks just as attractive as any young bloke. Do check out the awesome looks and outfits of his co-stars from the movie: Sidharth Malhotra and Alia Bhatt.

Fawad Khan is a lover of dapper-looking suits. He looks stunning in this flawless coat style. This outfit will work best if you wear it on a wedding, fancy party or even for a big day at work.

A man who always loves looking good. His love for looking sophisticated and graceful in jackets creeps upon his fans. The royal blue jacket in literal terms referred to as ‘Nehru jacket’ and finds its way into the wardrobe of a $2 million worth of an actor.

Nothing, just the new Bollywood’s emerging star’s evening casual outfit style and you are absolutely awed.

In his most-watched out serial ‘Humsafar’, Fawad Khan has artistically managed his dressing style along with his iconic acting. His most symbolic and representative look on the sets of Humsafar, alongside Mahira Khan, gives us all vibes and deja vu essences of the deep chemistry.

The life of a celebrity is definitely a roller coaster of premieres, red carpet events, ramp-walking traveling, and of course running away from paparazzi. But what matters here is that who does all these things in style? The celebrity impression never goes away even if you happen to be doing something as minor as going to the airport. Well, Fawad Khan has proved that he can make casual, comfortable yet stylish clothes look for traveling too.

Fawad Khan is the dream guy for a lot of girls out there. If we talk about the sense of style, he is also definitely of our favorites. Although, he happens to have dressed much better in his other projects. His wardrobe in ‘Khoobsurat’ is no less.

His promotional outfits and styles are one of the best. Only he can pull off a unique coat outfit as one, with this much of class. Though he always shows up in the perfect outfit, when he is not in the spotlight, you will also find his looks very chic in an effortless way.

↓ 9 – The Suit-with-Specs Look of Fawad Khan

The suit-with-specs look of Fawad Khan is no less than the most sophisticated one. He surely knows his stuff of pulling off nerdy specs with a suit like a pro.

Rarely, does he go out wearing something desi or cultural. But when he does, nobody can beat his looks in a traditional avatar. This chic Raghavendra Rathore outfit is the epitome of his exquisite looks.

The winter style of a classic sweater, specs, and tie makes it quite desirable for anyone who has a craze of winter vibes. Fawad Khan sets his own dressing trends, be it any season. He loves to add his personal touch in his dressing style to achieve an elegant look. Take style cues on how to rock a sweater-like shirt with pink bottoms.

It is another ‘good boy look’ of Fawad Khan. This outfit gives an early summer vibe. He is wearing a linen jacket by Khanijo over a sweatshirt by Bhane, and white Zara pants. Also, a pair of tan shoes from a famous shoe brand ‘Hush Puppies’, Fawad Khan is looking elegant in this outfit.

His endlessly dashing vibes drop-in, in nearly every single outfit that he puts on. Fawad Khan is surely a heartthrob. Ask any die-hard fan of Fawad Khan and he/she will tell you that no one can be as handsome, sexy, and amazing as this bombshell hero.

Fawad Khan has an eclectic taste in dressing styles. In his photoshoot that was supposed to advertise summer-wear suits for men, you can take ideas of what works and looks best in summer with the unique summer look of the 38-years old star.

Fawad Khan is on the hot list of everyone and he just rocked the red carpet with this Dior suit. He spilled beans about his wardrobe, his style, and how it feels to be an icon while giving an interview with Gulf News.

Fawad Khan told that he observes a lot and always tries to pick out whatever looks good on him and of course the outfits that are never too flashy. He further said, ‘Remember, whatever suits you is the best, and no matter whether it is the trend or the rave of the season’.

Although sweatshirt season has been over, it is essential to your wardrobe. Fawad Khan looks stylish in this Diesel sweatshirt over a pair of jogger pants.

Only if pictures could speak, this one would have been screaming loud. In the latest photoshoot for his brand, Fawad Khan is making his fans drool with his photos. He is looking sexier than ever in this traditional avatar.

Fawad Khan is, no doubt, a stunner. He has a praiseworthy sense of dressing. In addition to enjoying his successful acting career in Pakistan, Fawad Khan also owns a clothing brand named ‘Silk’ run by his beautiful wife, ‘Sadaf Fawad Khan’. Since this actor is so attractive and good-looking himself, he doesn’t need any model to present his beautiful collection.

It is an exclusive look of Fawad Khan in which he is presenting his latest collection for men. Dressed up in traditional wear, Fawad Khan looks totally dapper.

It goes without saying that every handsome man always wants to look stylish by pulling off the best looks every now and then. Well, Fawad has shown us just how to go about that. Now that you have looked at the wardrobe of our favorite man on different occasions, you can copy any of your favorites.

This eminent star famous in both Pakistan and India appears on the list of the best-dressed men for being authentic to a timeless style. Fawad Khan knows what exactly works for him, and therefore, whatever he puts on, it really works for him!

So, what are your thoughts about the looks and dressing sense of Fawad Khan? Do you think he has a perfect sartorial sense? I will give him 10 on 10 for his dressing style. What about you? Will you copy any of his stylish outfit? Do let us know your thoughts in the comments section below!

An unapologetic girl who loves to live in her fantasy world of fairy tales.