Zayn Malik Outfits. The British Pakistani 27-year-old singer and songwriter Zayn Malik is the heartthrob of youngsters. Evil Eyes Off! He had been a part of one of the most popular and richest boy bands One Direction. His Asian blended with British looks and amazing voice quality got him fame among teenagers. He had also been promoting various clothing lines and designers. He initiated his career from X-factor with the One Direction band.


He had been known as the Bradford Bad Boy of 1-D due to his mischievous personality and scandalous image as well as rock star hairdos. Zayn was ranked as the 27th Sexiest Man in the World in 2011 and also was declared as the Best Dressed Male by British GQ. He was voted as the most handsome male by several magazines.

The 5.9′ singer Zayn Malik is currently dating one of the most beautiful blonde American Fashion Model of the time, Gigi Hadid. They were also featured as a couple in the May 2016 Vogue edition. Zayn’s major style statement incorporates aviator jackets and sharp tailoring. He’s often seen wearing black regardless of the designer styles and trends at various events and with Gigi Hadid along with boots and dope topcoats as well. The layered hood will never get old with the rock star. Zayn Malik is always seen experimenting with his hair and trying out different styles, cuts, and dyes. In 2017, the pop singer seemed to love pulling off the spiky dyed hair with blond highlights and mid fade along with a tapered look. Discussed below are the 19 various outfits as well as the significant clothing brands worn by Zayn Malik. You can have some significant ideas if you want to style yourself like the rock star. Although the singer’s clothing is all from the best designers who are worth thousands of dollars but still you can afford a few designer pieces. 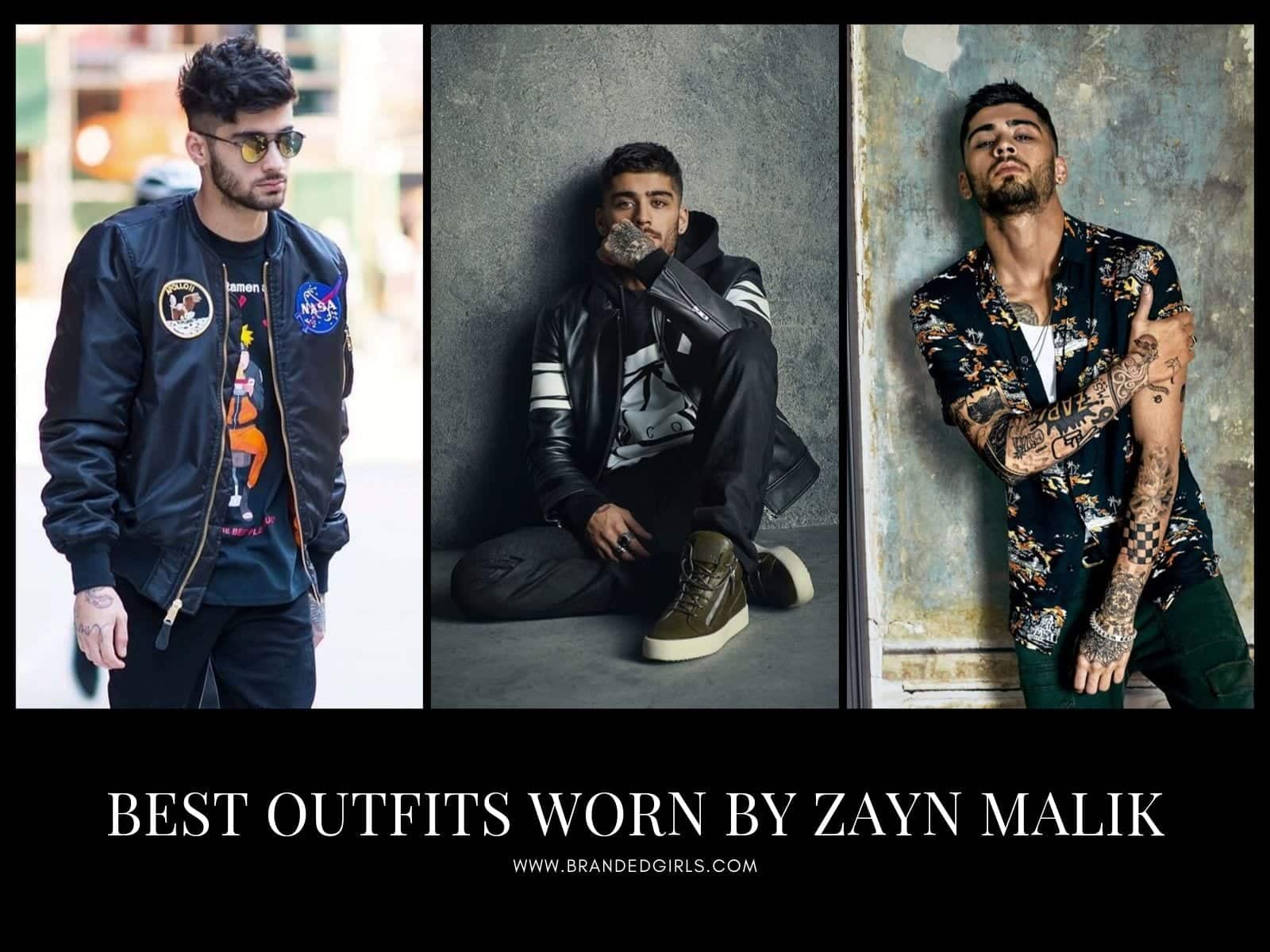 All About Zayn Malik

Is Zayn Malik your hottest new crush? Are you one of those “One Direction” fanatic fans who used to listen to their songs to hear Zayn’s audio part? Do you still feel sad about Gigi and Zayn’s breakup? Or do you secretly want Zayn and Perrie Edwards to be together one more time?  Let Team Branded Girls help you in taking a sneak peek of Zayn’s private and professional life. 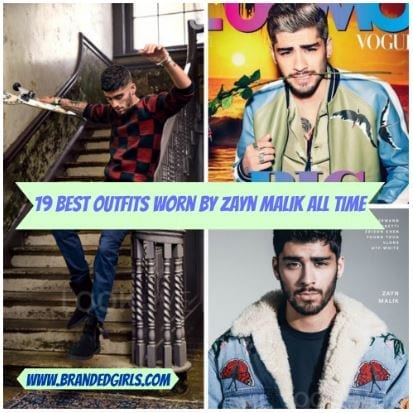 As per his recent selfie, in 2020 we’ll once again be seeing Zayn Malik in a close cropped chop. 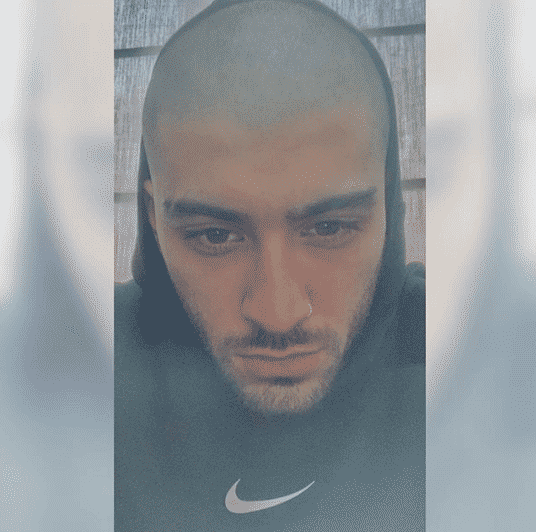 On Feb 11, 2017, Zayn Malik was seen at Clive Davis Party at s Angeles carrying an all-black attire. His pitch-black Balmain jacket caught the eye of the fashionistas.

Moreover, his Tom Ford turtleneck worth thousands of dollars spiced up the entire outfit. The highlight of this Black outfit is the traditionally embroidered Balmain jacket. With Tomford turtle neck shirt, shoes from Armani brand, and black denim jeans, he completes his pre-grammy swag look. You should also have a look at these Best Hairstyles of Zayn Malik All the Time. 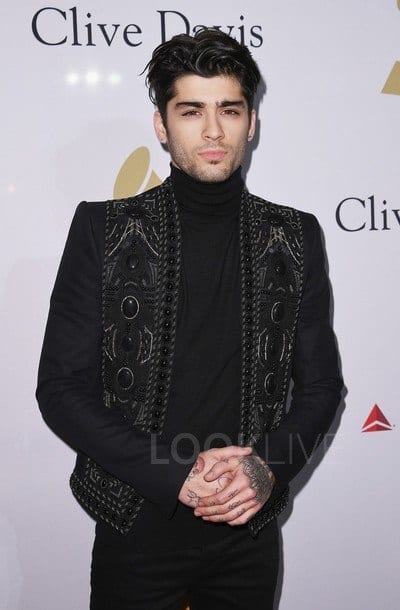 Zayn Malik is often seen with his girlfriend, Gigi Hadid, in his usual catchy street style. He had been recently observed in Los Angeles wearing a Coach Rexy dinosaur sweater with his very own Giuseppe Zanotti x Zayn sneakers. The ripped jeans, which are currently the hype of the fashion world, are also quite enchanting if you want to adopt the right Zayn style. Also, have a look at Best Looks of Gigi Hadid This Year 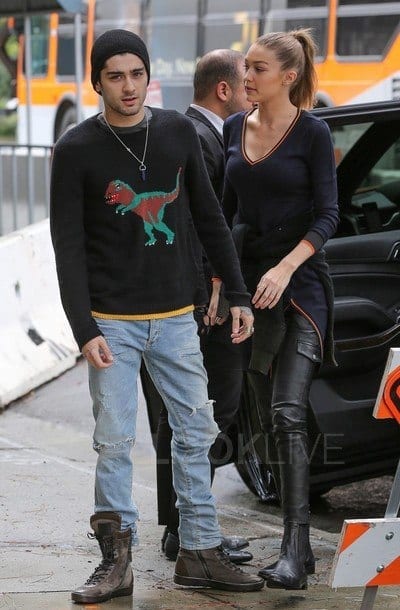 Only a few can carry the cropped haircut with mid sides as charmingly as the heartthrob Zayn Malik. He had been seen in his usual classy cropped hairdo in a messy style on the street of LA wearing an Amiri T-shirt that made him look even hotter and talk of the town. 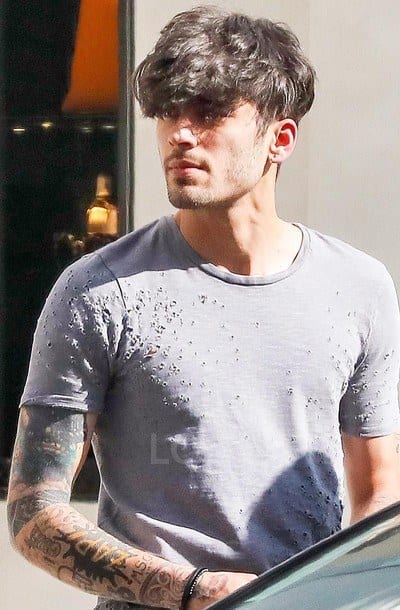 Looking for fall outfits inspiration? Here is the perfect look to carry yourself in the fall season inspired by none other than Zayn Malik! Only Zayn Malik can wear a topcoat in such an enticing manner with Guidi Back Zip boots. However, you can adopt a similar style during this spring with a pair of casual jeans and long boots. 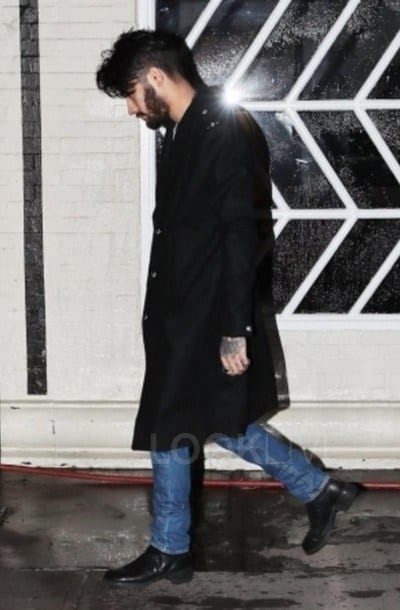 Leather jackets seem like close to Zayn’s heart. The star singer has been seen slaying classy leather jackets with leather pants at formal events as well as concerts. This bold collar leather jacket looks extremely stylish and masculine at the same time. We are in love with the color of his hair dye. Aren’t you too? If you’re inspired by this jacket and plan on buying one for yourself, don’t forget to check out these Top Leather Jacket Brands for Men. 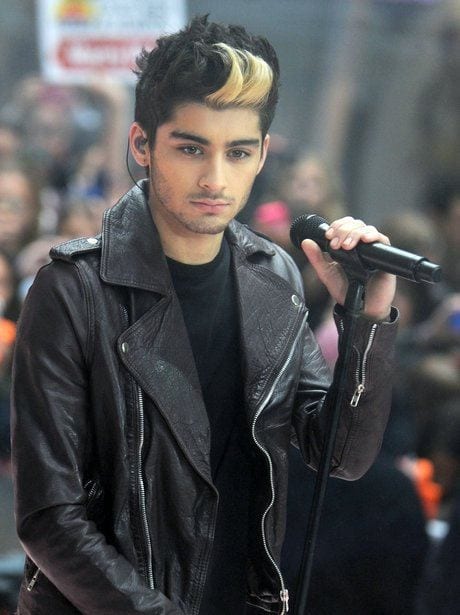 Zayn is often seen wearing floral tees as well as a button-down floral shirt at different events. The black floral shirt was worn by the singer while his dinner with Naughty Boy in London. The monochrome quality of the tee is quite appealing for young guys. This shirt of Zayn proves that Florals look equally good in black and white too and it is not much necessary to add reds and yellows to make an outfit more flowery. 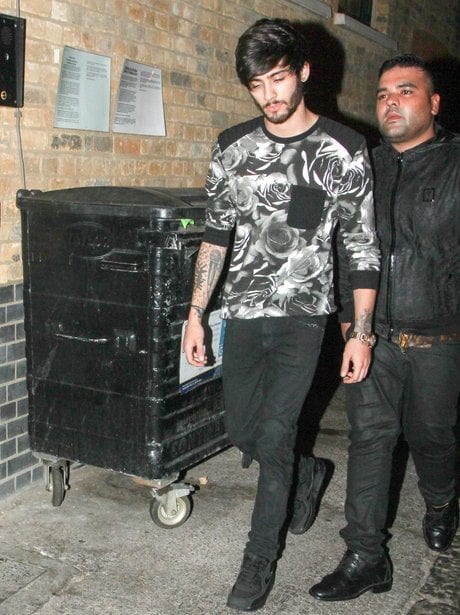 ↓ 13 – Jeans and Jacket Attire for the Concert

The pop star mostly wore jackets in jeans, leather, and other material with casual jeans or pants during his concerts. The red and black jacket combined with the black button-down shirt is very appealing to the audience and suits his persona quite well. 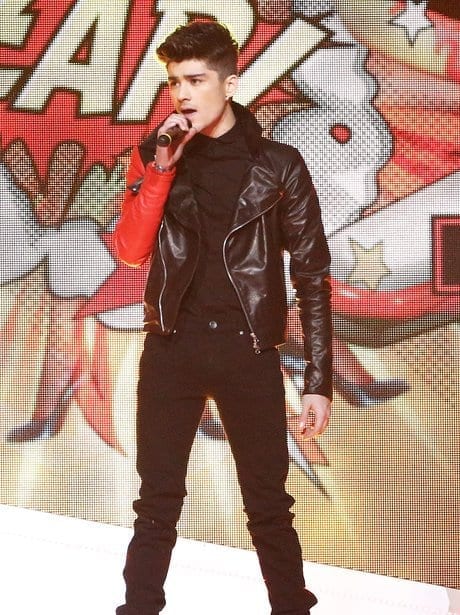 The rocker has been seen on the cover of Highsnobiety wearing an embroidered Gucci Denim Jacket which adds slight colors and furry collars to appeal the fashionistas around the world. Seems like Denim is Zayn’s all-time favorite clothing piece! Added fur to the denim jacket makes it a little warmer and comfortable. The florals on the denim jacket are making it look more appealing. 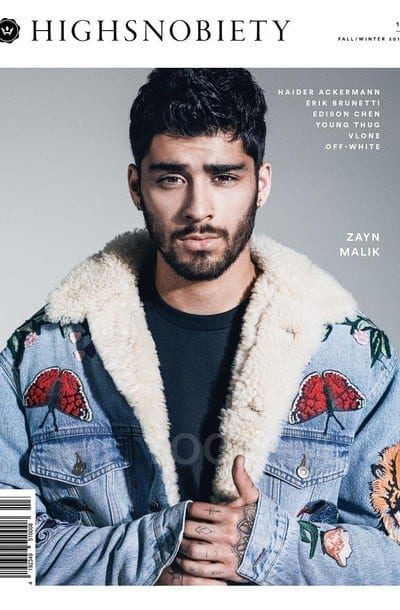 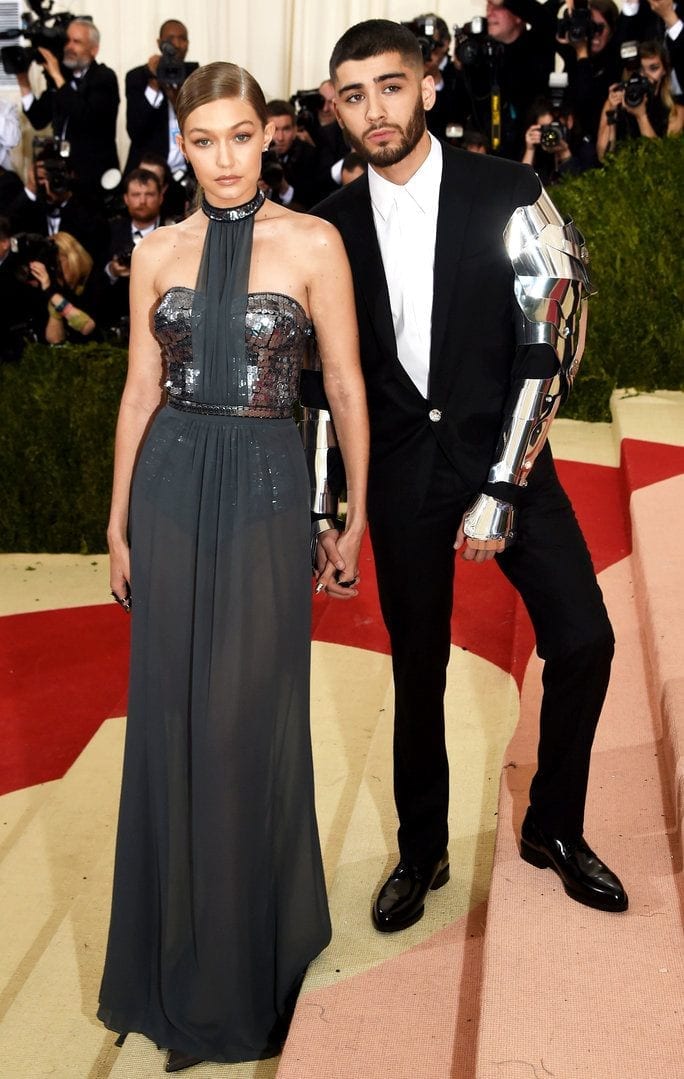 The young star has been seen holding hands with Gigi Hadid at the Versus Versace Fashion Show in a pair of pitch-black Versace Medusa Head Badge jeans and a simple black tee. Look how cute Gigi and Zayn are in this picture! We can’t wait for them to see getting married to each other soon (Evil Eyes Off!) 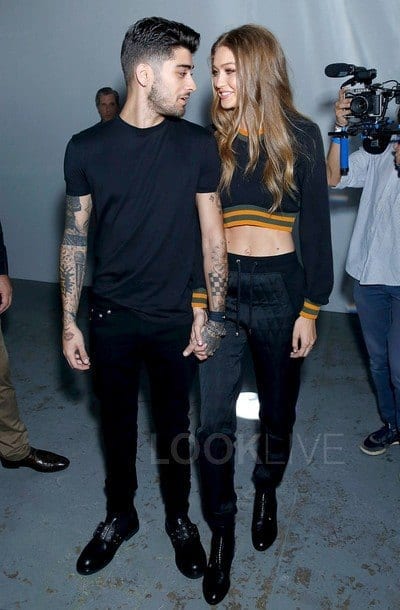 Zayn Malik’s shaved all hair look was super drastic but classy. The star rocked the new look at various events like the surprise concert at the release of his new album. Zayn wore the Faith Connexion Grafitti Leather Jacket which highlighted his tattoos even more. He looks equally good with his shaved head. 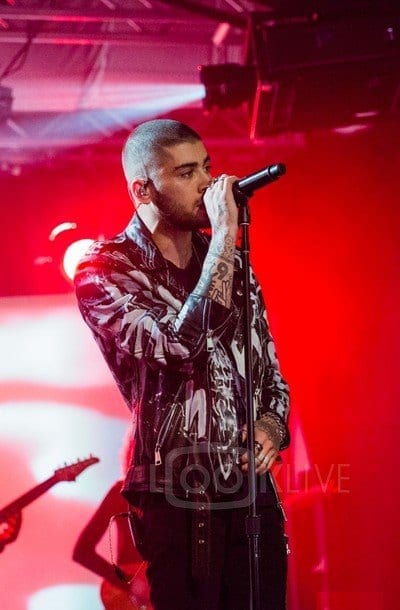 The jackets lover pop star was seen on the cover of L’Uomo Vogue 2016 in a Valentino Bird Motif Bomber Jacket. The cool blonde highlighted slick back hairdo rocked the entire look. The year 2016 was all about Zayn and his music and Vogue couldn’t resist to take him on their magazine cover. 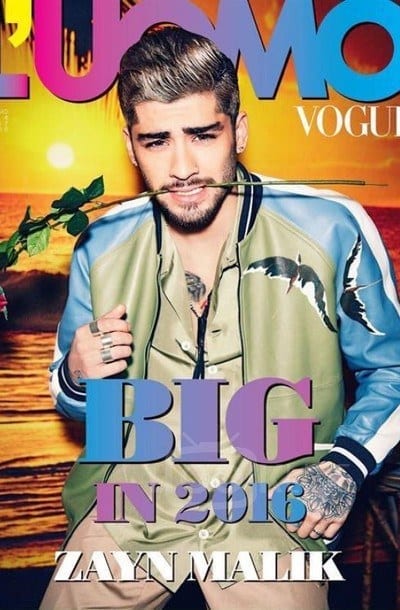 The rockstar posed for the GQ magazine September 2016 in a greenish-gray Loius Vuitton Suede Bomber jacket along with dirty white Balmain jeans and Giuseppe Zanotti side zipped sneakers. The dark, dusky and messy look is what Zayn’s signature style and it suits him well. 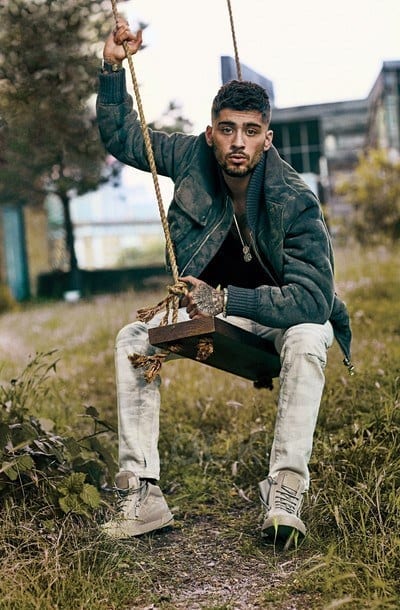 Another perfect look of the rockstar that can be adopted by guys during fall is a large check sweater in red and black with blue cotton jeans. Guys can spice up the attire by adding a pair of  Giuseppe x Zayn long velvet classy boots. Don’t miss out 20 Most Eligible Muslim Bachelors in World|Rich and Charming 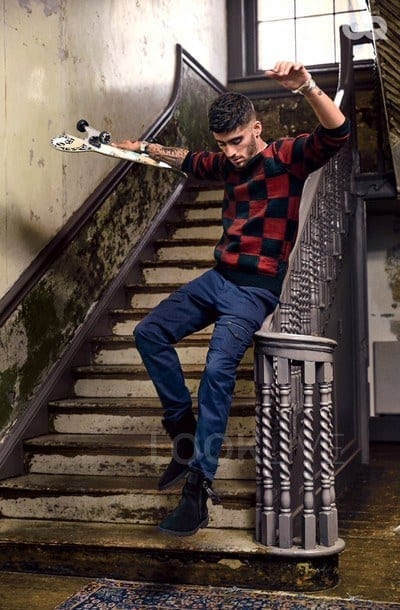 The mid faded sides and center spiky hairdo is pretty cool for young college going boys. Guys can add bronze highlights to spice up the hairdo. The Versace wool-cashmere knit sweater worn by the star for the Evening Standard 2016 was worth USD 975. This young lad surely deserves to be on a cover page and so he made it! We are head over heels on him. Aren’t you too? 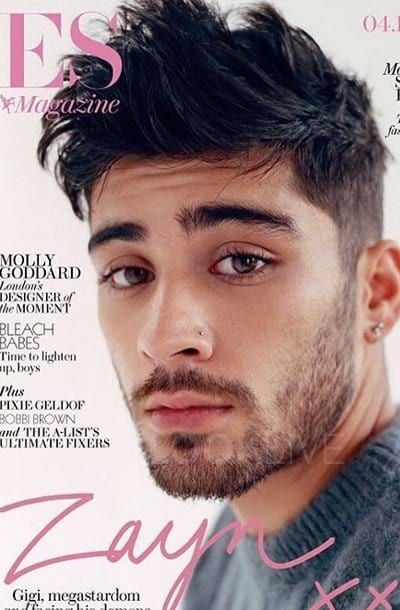 Isn’t he looking proud, happy and cute with an award in his tattooed hand?  The star was seen in a semi-formal attire at American Music Awards 2016 held at LA when he won the New Artist of the Year award. The navy blue Versace suit jacket rocked with the simple black inner tee looked both catchy and classy and highlighted his Asian persona even more. 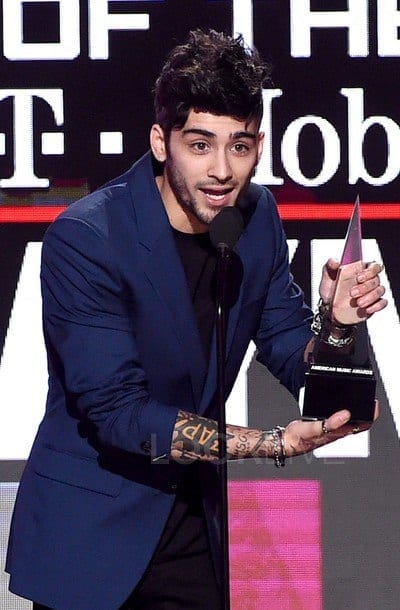 Zayn Malik was seen wearing a black and white leather jacket with a black inner hood displaying the GQ graphic along with Giuseppe Zanotti catchy Leather Sneakers for the promotional photoshoot of his collaboration with Giuseppe Zanotti. His tattooed hand is making him look not less than a rockstar! He likes to accessorize himself with a couple of rings, a loose silver wristwatch and a pair of black studs. 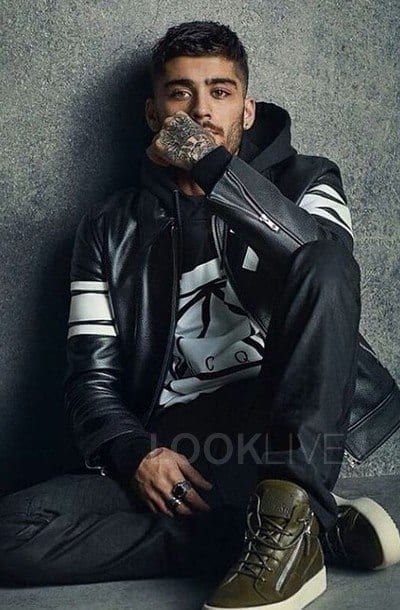 The rockstar was seen at the LA International Airport carrying his usual casual and trendy style in a furry denim trucker jacket by Tommy Hilfiger and a black beanie hiding his raven brown locks. Seems like Tommy Hilfiger is Zayn’s favorite outfit brand as he is spotted many times in numerous products of Tommy Hilfiger. Denim is something which you can wear any time of the year and it suits everyone. The hood on his head and long-chain in his neck add a little more swag to a routine look.

The superstar was seen outside Vivid restaurant wearing a NikeLab Essential Hoody and Nike shoes. The upper charcoal gray jacket by Loius Vuitton highlighted the entire look as well as the gray sweatpants. 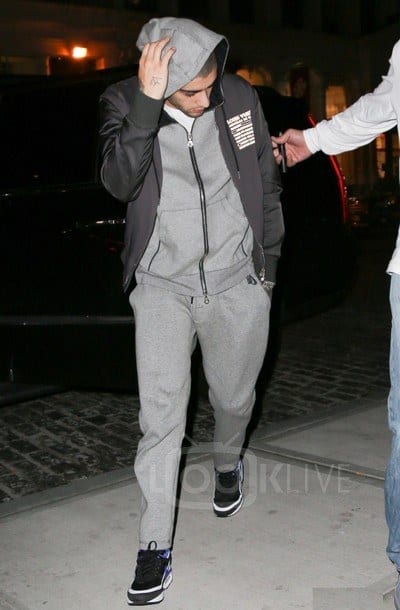 You can tell us about your favorite Zayn Malik outfit in the comments section.

Willing to steal all Zayn Malik’s fashion looks? You will be surprised that it is now possible! What if we tell you that now you can easily shop all the outfits worn by Zayn Malik from a one-stop online shop? Isn’t it good to hear? Steal the complete Zayn Malik’s shirts from here.