Nike Hijab Styles: Nike makes its mark once again at the beginning of 2021 with a game-changer and socially influencing hijab design for athletes. Its line of athletic hijabs to cater to the comfort, as well as the style of millions of female Muslim athletes all over the world, has won the hearts of many people.

Gone are the days when Muslim athletes struggled to stay modest in Olympics. The design of Nike’s athletic hijab is apparently going to change how female Muslim athletes perform and experience in the sports fields. It’s not just a statement of style, but a statement of confidence as well for all Muslim athletes. Since its first launch, it has already made quite a strong impact in media even if it did not want to, but in a way that’s good for their marketing so that more women can look up to it.

It’s been years when the Nike Pro Hijab was released; however, the motivation behind this collection for Muslim athletes can be traced back to the founding mission of Nike that is ‘to serve world athletes with their signature addendum that is if you have a body, you are an athlete’.

A figure skater Zahra Lari, from the United Arab Emirates – models in the athletic hijab launched by Nike for an advertisement.

So, the new design of hijab initiated by Nike is practically the first hijab attempt by the gigantic fashion brand, and sources claim that this is their commercial step to encourage more Muslim women and girls to access long-term profession in sports easily or simply feel comfortable and confident in the sports arena like other women do.

It’s an absolute gifted factor to Muslim women in foreign countries or playing for foreign countries to achieve their goals while maintaining modesty in Olympics. Muslim women have often stepped aside due to prejudices created in the sports, but now it is surely the high time that fashion brands themselves have taken the unique step to empower all women, no matter western or Muslim.

What’s so Unique about Nike Hijab

Nike is the first global manufacturer that makes hijab for Muslim women athletes. All of the Nike hijabs are super comfortable and breathable that work best for athletes. Weightlifter ‘Amna Al Haddad’ also has positive reviews regarding Nike Hijab. She once said,

‘It basically feels like you’re not wearing anything, but at the same time, you’re actually still covered, and you’re able to respect your faith and still do sports the way you like.’

Nike hijabs are made of lightweight, soft and breathable materials and seams that do not irritate the athlete’s skin. It has a pull-on design and long back, offering a personalized fit. Nike hijabs are not only comfortable but also they have become the game-changer for both brand itself and representation of Muslim women and their faith all over the world.

Another unique feature of this Nike hijab is that their meticulous design helps absorb sweat without leaving ugly sweat marks on fabric. Moreover, it stays in place during vigorous exercises and intense workouts.

Pro-hijab title given to Nike’s New Design of Hijab

So, the most powerful sportswear ever to date has released a new hijab design with the title of ‘pro-hijab’ that has been modeled with extensive stretching ability and qualitative polyester. These Nike Hijabs not only allow Muslim women to comfortably cover their heads while playing in the field but also avoid the accidents through usual headscarves which often leads to them messing up while playing or poorly performing.

When France put a ban on its invention of ‘Burkini’ for Muslim women, it seemed like Muslim women have fewer places to be themselves, but it could change. Nike could possibly be a great success market after this, and more women can look up to it when wanting comfort and style both at their disposal. This athletic brand has been booming with tons of success stories after this Nike’s Pro-Hijab launch, and this performance hijab is available in gray, black, and navy blue.

The price of this blissful invention in sportswear is quite reasonable and ranges from only $35 to $40. Everyone can assure that it is quite worth the price, especially if you know the struggle of a Muslim woman in a sports team.

One more name that has to be credited with this revolutionary invention of the performance hijab by Nike is of Amna Al-Haddad, a great weightlifter of her time. She coordinated her concerns and her idea to Nike about how a garment like this one is needed in the sports industry and fashion right now. She had solid basis behind this as she was also aware of the concerns of many Muslim women in sports.

Eventually, the Nike company took her concerns. It turned it into a proper inventory to introduce their new performance hijab for athletes by selecting the most flexible and lightweight material available at their disposal. The Nike swooshes designed on these pro hijabs also happen to be created based on the demands of Muslim women who want to show that these garments are specifically for sports or some competition.

The advancement of the American sports retail is quite evident with the fact of how it initiated a product like this empowering Muslim culture despite the increasing intolerance against Islam and its people. But Nike paces up head-on with just the right plan in mind and does not look past the needs of its customers and satisfying them to the core, which is exactly what the purpose of a fashion brand should be.

The plan or the new launch is surely big steps as Muslims nearly make up 1.8 billion of the world’s population that Nike is advertising for. It’s quite impressive that Nike is finally added to the list of several countries catering to the culture of Muslims. The timing could be more empowering at this point in time where Trump’s explicit disregard of Muslims and Muslim women; and the greatest American sports apparel just launched a pro-hijab.

The full title that the new hijab design has been labeled with is called “Nike Pro Performance hijab”, says some sources that reported religiously on the new fashion invention. The idea is not exactly new but first made a media appearance and recognition when the sports celebrity Rehana Malik first wore it back in about 2008. She boldly spoke up against the fact that women should practice everything from daily life to professionalism in the clothing they find themselves comfortable in.

Unfortunately, she could not find a brand or a product that would cater to this fashion requirement of her, so she took the matter under her own rule and came up with a design of hijab that was somewhere between resemblance of a hat and a scarf. This made things much easier for Malik, and she confidently carried out all her sportive endeavors from a mundane day at the gym to play in the fields.

She was also absolutely thrilled to hear the fact that Nike has finally introduced their creativity of athletic hijab.

With this innovative swimwear collection, this renowned athletic brand ‘Nike’ has made it much easier for women athletes to swim conveniently without worrying about their modesty. This Victory Swim collection comes with cutting edge hijab designs.

This modest swimwear entails swim leggings, tunic tops, and hijab which Muslim athletes can mix and match for full coverage even in water. With this line of performance swimwear, women swimmers can enjoy full range-of-motion underwater. 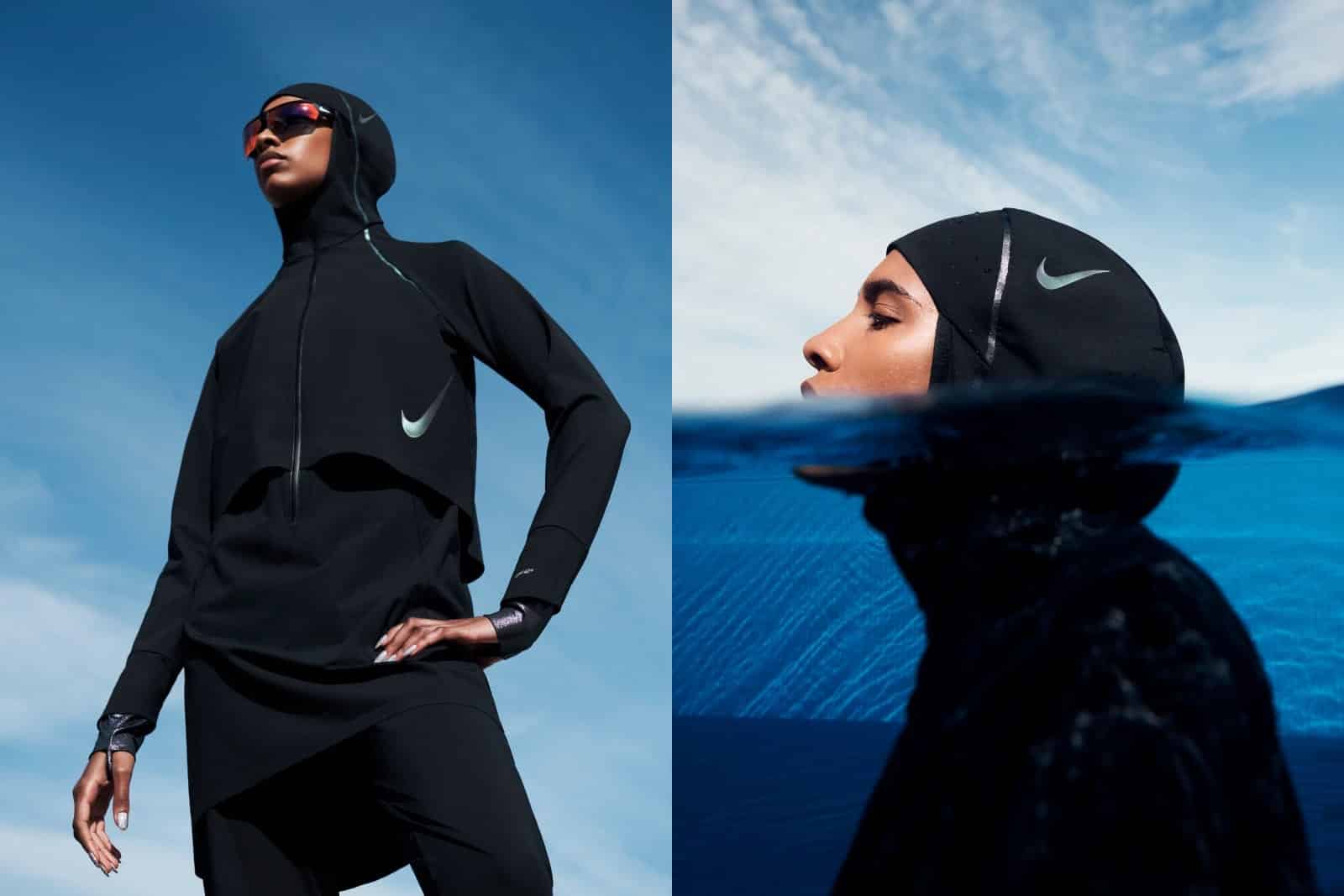 Nike Victory Swim Collection- Who is it for?

Women athletes belonging to any background, having varying aspirations, abilities, and body types can now participate in water sports. Thanks to this innovative modest swimwear created by Nike that comes with a hijab. Now females can easily dive into a pool, power down a lane, or body-surf sea waves without any fear of losing their modesty. This performance swimwear will not leave Muslim athletes struggling to keep the hijab in place while swimming. With this Victory swim that comes with hijab, nothing can stop you from making victory your fate.

This swimwear collection offers great comfort as well as coverage even in water so that Muslim athletes can freely move underwater. Its hijab is a secure fit made of quick-drying and lightweight fabric. Also, the interior elastic in its hijab keeps hair controlled as well as covered securely while you swim.

Each silhouette containing in this Victory Swim Collection is made from warp-knit fabric which is a breathable and lightweight material that not only dries quickly but also eliminates excessive stickiness to the body.

What’s more interesting, this hijab swimwear delivers a head-to-toe UPF (Ultraviolet Protection Factor) 40+ rating, which falls under the excellent protection category. Muslim women athletes can now simply focus on doing their best in sports without worrying about their swimwear which will no more hinder their performance.

All in all, this little step of such a big sports brand ‘Nike’ has significantly improved access of Muslim women to sports. Those women who are passionate about sports but fear to participate in international sports just due to challenges they faced in wearing modest performance hijab can now freely participate in sports.

Another best thing of Nike Pro Hijab collection is that it has given Muslim athletes an effective representation within such a gigantic sports industry. So, enjoy your freedom to move freely with these Nike Hijabs.

Q. When did Nike launch its Pro Hijab Collection?

A. Nike unveiled its exclusive Pro Hijab collection on 2 days before International Women’s day back in 2017 for veiled Muslim women athletes who love participating in sports. This Nike Pro Hijab collection was made available on December 1st, 2017. This Pro Hijab collection is a collaboration between Middle East Muslim athletes, including weightlifting UAE athlete ‘Amna Al Haddad’ and Egyptian marathon runner ‘Manal A. Rostom’. Both of these women were the pioneers in making this product a reality so as to minimize the practical challenges of Muslim athletes for wearing religious clothing items while participating in sports.

Q. Who is the Nike hijab model?

A. Manal Rostom is the first Nike Hijab model. She was the one who called out Nike back in 2014 for featuring something that represents Muslim women athletes. It is after her efforts; Nike released its performance headwear specifically designed for Muslim athletes.  Rostom modeled this Nike Hijab in order to normalize the women representation wearing hijab in sports. She emailed her concerns to Nike that sports organizations should cater to the needs of Muslim women in sports.

Q. Can You Swim With The Nike Hijab?

A. In addition to Muslim women in sports like running and weightlifting, one can find a large proportion of Muslim athletes in swimming too. Nike has also managed to cater to the needs of these women athletes with its Nike Victory Swim Hijab. This exclusive collection for swimmers gives women the freedom to move in water without fear. Victory swim offers great comfort and full coverage to athletes while swimming.

Q. Is The Nike Hijab Waterproof?

A. All Nike Hijab launched for modest Muslim women athletes are waterproof. Nike’s swimwear collection comes with waterproof hijabs. This coverage swimwear and tunic are fully equipped with waterproof built-in sports bras. Also, its swim hijab comes with a mesh pocket that is specifically designed to keep the hair of women swimmers in place.

Q. How do culture and religion influence women’s participation in sport? 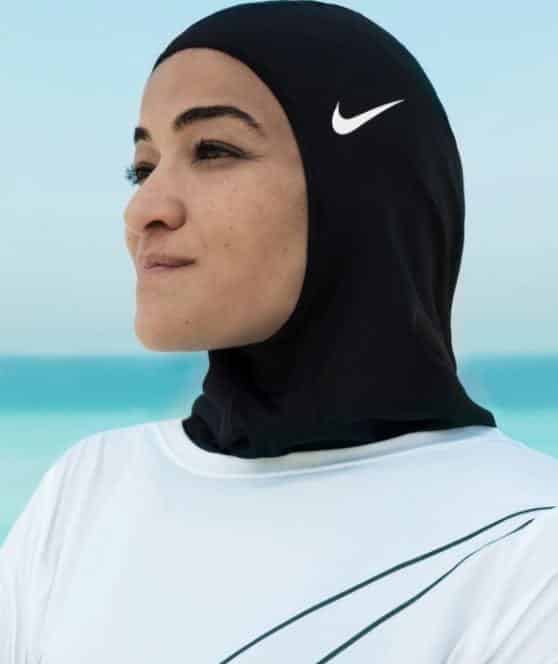 An unapologetic girl who loves to live in her fantasy world of fairy tales.